What a Difference an Election Makes

What a difference an election makes. Since the election, we have seen a pronounced increase in the popular 30 year-fixed mortgage rate. In the words of Federal Reserve Chairman Janet Yellen, financial markets expect that expansionary fiscal policy will accelerate U.S. economic growth and increase inflation. As a result, the 30-year fixed mortgage rate is now over 4 percent. In addition, the Federal Open Market Committee (FOMC) will likely announce this week a raise in the target range of the Federal Funds rate, from 25-to-50 basis points (bps) to 50-to-75 bps.

The “Trump Bump” and the FOMC rate increase will impact many areas of the economy, including the housing market. To see the sensitivity of the housing market to rate decisions, one only has to look back to the “taper tantrum” that occurred after Fed Chairman Ben Bernanke announced a plan in May 2013 to reduce asset purchases. The average 30-year  fixed-rate mortgage increased from 3.54 percent to 4.49 percent. Subsequently, existing-home sales fell by 10.4 percent between July 2013 and February 2014. The annualized pace of house price growth slowed from 10 percent to less than 5 percent by the end of 2014.

The “taper tantrum” changed the mortgage rate by almost a full percentage point. The combination of the post-election and FOMC changes may have a similar impact, so the natural question to ask is “what are these changes likely to mean for the housing market in 2017?”

“Even after the “Trump Bump” and FOMC rate increase, 2017 will still be a good time to buy.”

First American’s proprietary Potential Home Sales (PHS) model simulates how changes to mortgage rates influence the pace of existing-home sales, prices, and affordability using demographic, labor market, house price trend, and financial market data. We used the model to simulate the impact of the “Trump Bump.” Over the course of four days between November 11 and 15, the 30-year fixed-rate mortgage increased from 3.6 percent to 4.0 percent. That quick increase reduced my expectation for existing-home sales at the end of 2017 by about 4 percent. More importantly, my expectation for annualized home price growth declined from 4.8 percent to 3.5 percent. As we saw with the “taper-tantrum,” the housing market responds to rate increases with a modest reduction in sales, but a more significant reduction in price growth.

Furthermore, we considered the impact to existing-home sales and house price appreciation of three possible Federal Fund rate levels: no change to the Federal Funds rate, a 25 basis point increase and a 37.5 basis point increase. For the simulations, we assumed that any target rate change will influence short and long rates equally and increase mortgage rates by the same proportion. 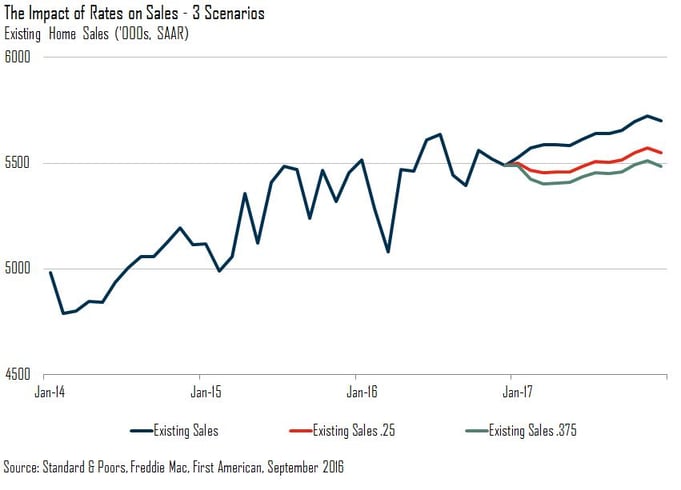 In addition to the impact on existing-home sales and house prices, first-time home buyers will feel the most impact of the rate increase. First American’s Real House Price Index (RHPI) adjusts prices for purchasing power by considering how income levels and interest rates influence the amount one can borrow. In short, real house prices provide a more relevant way to compare changes in affordability over time because they are adjusted for differences in home buyers’ income and the impact of interest rates on financing costs. Increases in real house prices decrease consumer house-buying power and, therefore, affordability by the same amount.

As rates rise, so do real house prices, while affordability declines. However, even with the 37.5 basis point increase, real house prices will still be 20.7 percent below the July 2006 peak.

In recent years, we have seen rate changes have a greater impact on house price appreciation than on the annualized rate of sales. When rates go up, house price appreciation slows down. That’s good news for potential first-time homebuyers. Even with the rate increases we expect to see next year, housing affordability is better than it’s been in years, when adjusted for consumer house-buying power. Even after the “Trump Bump” and FOMC rate increase, 2017 will still be a good time to buy.