Will Low Mortgage Rates Prevent Decline in Affordability this Summer?

The economic fallout and impacts to the housing market from the pandemic appeared to peak in April. The number of existing-home sales fell 18 percent relative to March, housing starts fell 26 percent, and the supply of homes available for sale approached record lows. While historically low mortgage rates made it more affordable for those with stable incomes to buy a home, tightening credit standards and limited supply of homes for sale made it more difficult for some to obtain financing and find the home they want.

“If household income growth slows and house prices continue to rise, even today’s record low mortgage rates may not keep affordability from declining.”

The RHPI this month reflects a steep increase in wages in April, which is not an accurate portrayal of how the pandemic has impacted income levels across the country. The Labor Department reported that average hourly earnings in the private sector were up 8.0 percent in April compared with one year ago. The pandemic driven-economic crisis has hit low-wage workers hardest. When the lowest earners get laid off, they’re removed from the data that the government uses to calculate earnings, causing average hourly earnings to increase. This month’s estimate does not reflect actual household income levels in April, and therefore, house-buying power and the RHPI reflect a more positive picture than actually exists. However, we can examine some potential scenarios that can provide perspective on how the drivers of the Real House Price Index impact affordability.

Scenario 1: No Change to Household Income

If the average household income remained the same in April as it was in March (no growth), house-buying power would still have increased by nearly $8,000 compared with March, simply because the 30-year, fixed-rate mortgage declined 0.14 percentage points. In this scenario, where household income remained the same as the previous month, the RHPI still indicates nearly a 1 percent increase in affordability relative to March, even after accounting for the accelerating nominal house price appreciation in April.

However, if the average household income in April fell one percent compared with the previous month (from $67,130 to $66,460), house-buying power would still be $3,500 higher than March due to low rates. But, the modest increase in house-buying power in this scenario is not enough to offset the nominal house price appreciation and affordability falls by 0.08 percent, according to the RHPI. It’s clear that the delicate interplay between income, rates and nominal house prices determines the outcome for affordability. 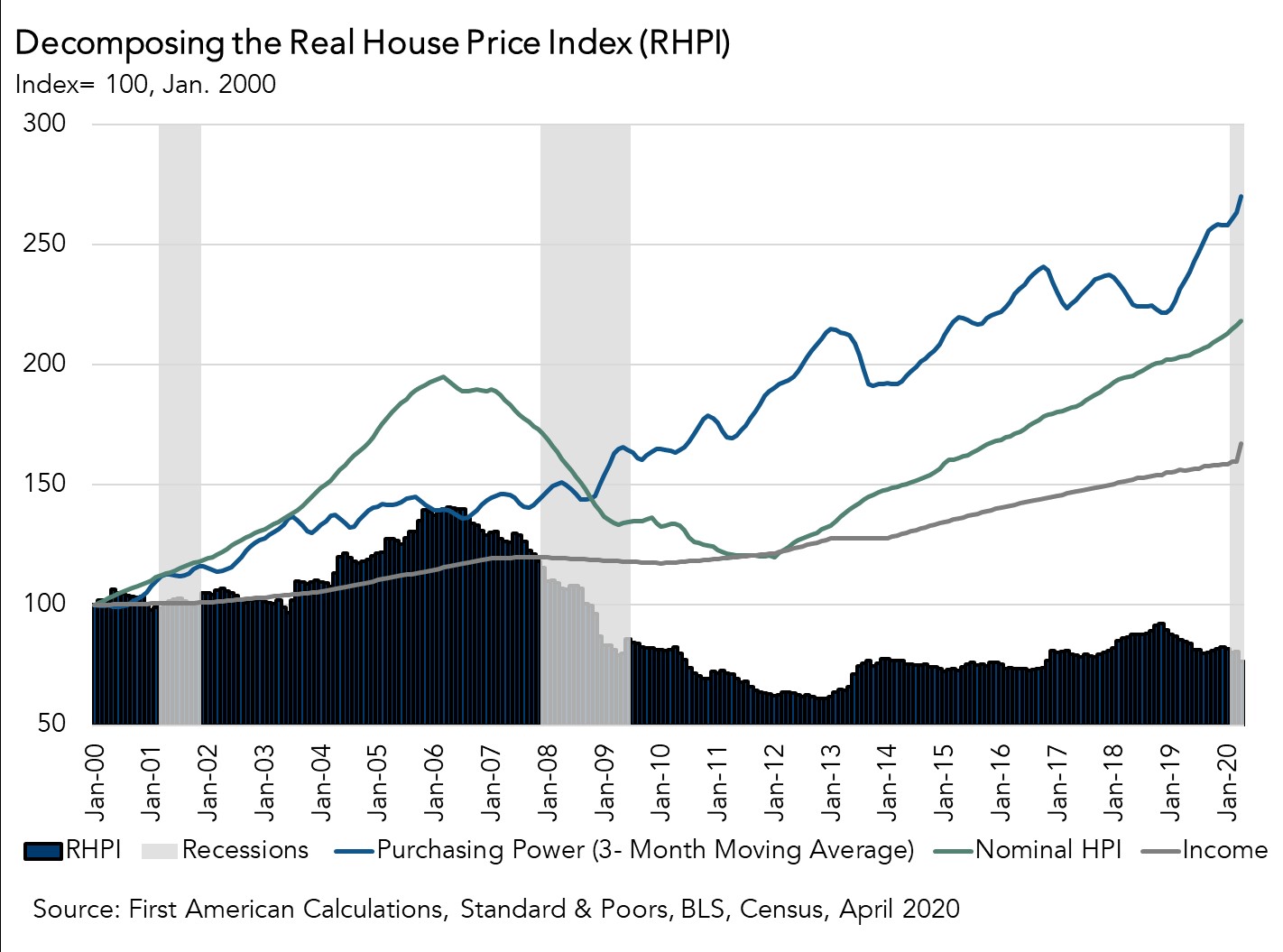 The question on everyone’s mind is what will happen to house prices and affordability in the near-term? In May and into June, mortgage rates have continued to fall, even reaching a historical low of 3.13 percent. Consensus among expert forecasts expect the 30-year, fixed-rate mortgage will average around 3.2 percent for the remainder of the year – good news for potential home buyers. However, our preliminary nominal house price index for the month of May indicates increasing house price appreciation, (7.9 percent year-over-year compared with 7.1 percent in April), as pent-up demand from a spring home-buying season frozen by pandemic-related stay-at-home orders melts into the summer and is met with near record low inventory.

Our research has also found that in past recessions, house prices show their “downside stickiness,” meaning they remain flat or their growth slows during economic downturns, but often do not decline much. Because of this, in the near term, we anticipate nominal house price appreciation to accelerate this summer. Additionally, the May Employment Situation Summary points to a decline in average hourly wages, likely resulting in falling average household income. If household income growth slows and house prices continue to rise, even today’s record low mortgage rates may not keep affordability from declining.

The RHPI is updated monthly with new data. Look for the next edition of the RHPI the week of July 27, 2020.

*NOTE: This month’s report reflects a steep increase in wages in April. The Labor Department reported that average hourly earnings in the private sector were up 8.0 percent in April compared with one year ago. The pandemic-driven economic crisis has hit low-wage workers hardest, and when the lowest earners get laid off, they’re removed from the data that the government uses to calculate earnings, causing the average to increase. This month’s estimate does not reflect actual household income levels in April, and therefore, house-buying power and the RHPI this month reflect a more positive picture than likely exists.