Why the Housing Market has Entered an Unprecedented Homebody Era

“Yet, today, we are in an unprecedented homebody era, as many existing homeowners continue to feel rate-locked into their homes and seniors continue to age in place.”

Collectively, the aforementioned market forces contributed to a positive gain of 366,000 potential home sales, but it was not enough to offset the loss of 446,000 potential sales due to the impact of rising tenure. The average tenure length, the amount of time a typical homeowner lives in their home, has increased dramatically in the last year. Since existing homeowners supply the majority of the homes for sale and increasing tenure length indicates homeowners are not selling, the housing market faces an ongoing supply shortage – you can’t buy what’s not for sale.

Before the housing market crash in 2007, the average length of time someone lived in their home was approximately five years. Average tenure length jumped to seven years during the aftermath of the housing market crisis between 2008 and 2016. The most recent data shows that the average length of time someone lives in their home reached 11.3 years in May 2019, a 10 percent increase compared with a year ago. 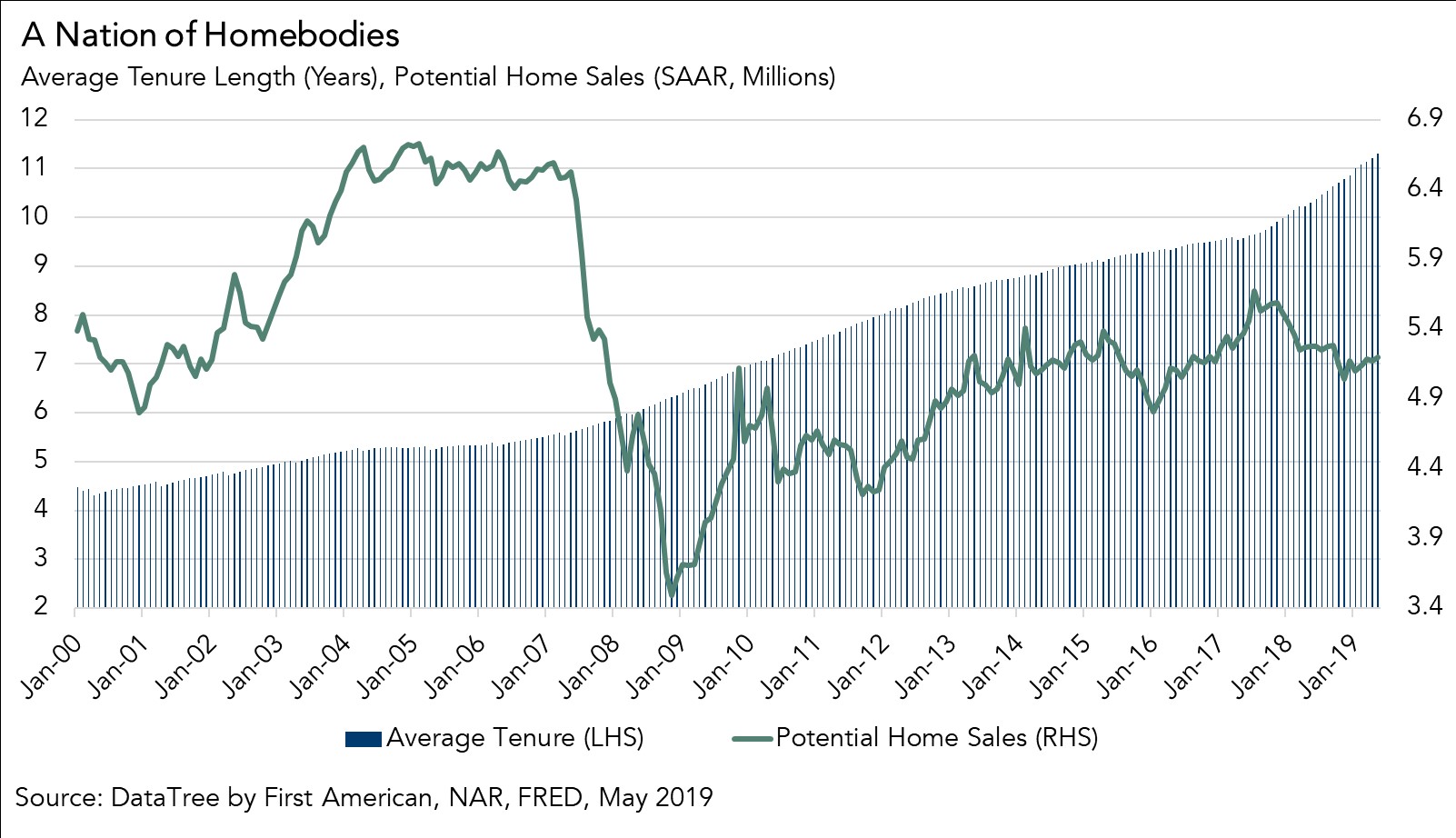 Two trends are driving the increase in tenure length. The majority of existing homeowners have mortgages with historically low rates, so there is limited incentive to sell if it will cost them more each month to borrow the same amount of money from the bank. While mortgage rates have come down compared with last year, they are still below the 3.5 percent mortgage rates of 2016.

The second trend influencing tenure is seniors aging in place. A recent study from Freddie Mac shows that if seniors and adults born between 1931-1959 behaved like earlier generations, nearly 1.6 million housing units would have come to market by 2018. Improvements in health care and technology have made ageing in place easier, which has meant fewer homes on the market.

Yet, today, we are in an unprecedented homebody era, as many existing homeowners continue to feel rate-locked into their homes and seniors continue to age in place. Looking ahead, more than half of all existing-homes are owned by baby boomers and the silent generation and they will eventually age out of homeownership. But right now, housing supply remains tight – you can’t buy what’s not sale -- and market potential is lower because of it.

For the month of May, First American updated its proprietary Potential Home Sales Model to show that: