Interviews on CNBC and Bloomberg TV: Discussing the Impact of Historically Low Rates and the Outlook for the Housing Market and the Economy

First American Chief Economist Mark Fleming was interviewed on CNBC and Deputy Chief Economist Odeta Kushi on Bloomberg TV earlier this week and discussed the impact of historically low rates on the housing market, and what the Fed minutes indicate about the direction of rate policy and the economy.

“A year ago, when mortgages were about 4.5 percent, it was only worthwhile to refinance for about 3 million people. Now, at a rate of around 3.5 percent, more than 11 million people are ‘in the money’ to refinance. So, we do expect a big refinance boom now that rates have finally gotten back to those low historic levels.” 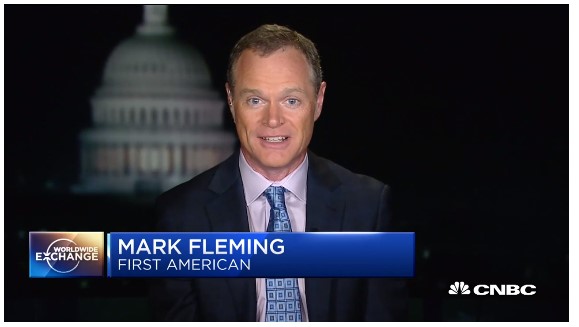 Deputy Chief Economist Odeta Kushi on the implications of the yield curve inversion:

“The distinction here is that the yield curve was already flat to begin with, and a lot of that was purposeful on the part of the Fed with the Quantitative Easing program and an increasingly global economy, which has made a flight to safety in our bond market. The yield curve was already quite flat, so we’re not seeing an inversion as a strong predictor of recession.”