The frequency of defects, fraudulence and misrepresentation in the information submitted in mortgage loan applications declined 4.2 percent compared to last month. Notably, this marks the first month-over-month decline since July 2018, thanks to lower mortgage rates. Decreasing mortgage rates contributed to an increase in inventory, reducing the competitive pressure on the housing market, as well as contributing to an increase in lower-risk refinance transactions.

“The future of fraud and misrepresentation risk is tied closely to mortgage rates.”

In line with this trend, the Loan Application Defect Index for purchase transactions declined for the first time in eight months, falling 4.0 percent in April compared with the previous month.

The two competing trends that resulted in a flat fraud risk last month were the increasing share of less risky refinance transactions working to decrease overall fraud risk, and the continuation of the hot seller’s market, possibly motivating buyers to misrepresent information in order to qualify for a bigger mortgage and increase overall fraud risk.

The mix of refinance and purchase activity fluctuated within the month of April. Refinance activity increased in the first half of the month as mortgage rates declined. However, lower mortgage rates also fueled an increase in purchase transactions, as buyers took advantage of their increased house-buying power. In fact, purchase applications hit their highest level in nine years towards the end of April. While loan application defects can happen on both purchase or refinance transactions, there is a higher propensity for fraud and misrepresentation with purchase transactions.

However, the decline in mortgage rates had a third and even more important consequence, which was to help alleviate some of the supply constraints that made the housing market so competitive. As we saw in last month’s report, in extremely competitive markets, there is more motivation to misrepresent information on a loan application to qualify for the bigger mortgage in order to win the bidding war.

Most recently, real estate agents indicate that their buyers are encouraged by an unexpected surge of supply. April did see an increase in total housing inventory, rising to 1.83 million from 1.67 million in March, which is a 1.7% increase year-over-year. Potential buyers feel less inclined to misrepresent information on a loan application when they don’t feel the pressure of a hot sellers’ market. Indeed, misrepresentation of income and employment both fell this month, by 1.7 percent and 3.6 percent respectively. 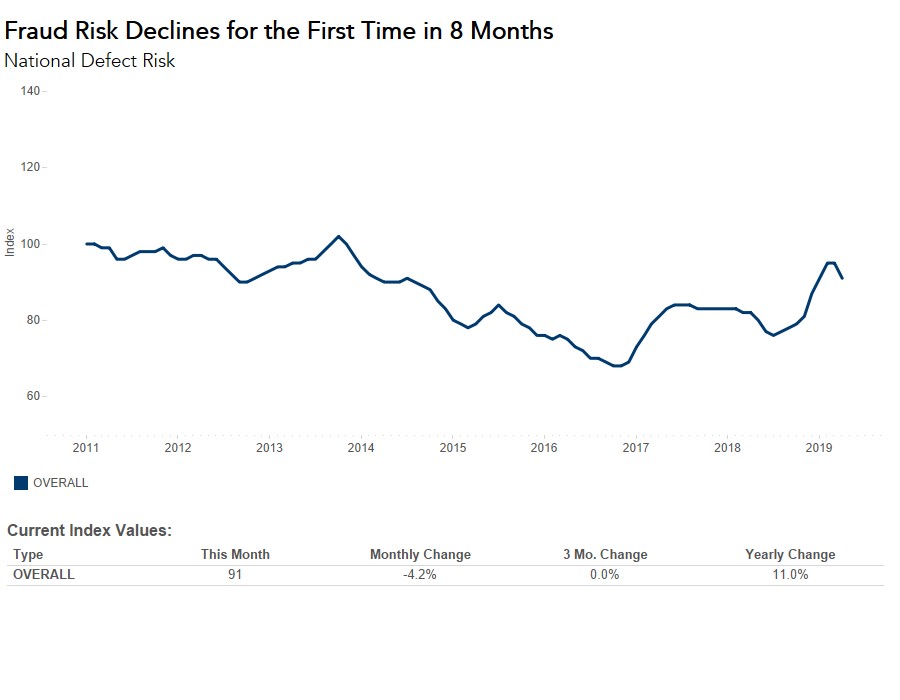