This month, the Federal Open Market Committee (FOMC) will consider again whether to increase the benchmark Federal Funds Rate for a third time this year. As I stated when the FOMC was contemplating a rate increase earlier this year, increasing the short-term Federal Funds rate has little impact on longer term rates like the 30-year, fixed-rate mortgage. But, more importantly, the FOMC may start reducing its $4.5 trillion portfolio of bonds purchased during the global financial crisis through various rounds of quantitative easing (QE). Almost 40 percent of that portfolio is mortgage backed securities (MBS) that the Fed started buying in 2009. As explained by the FOMC in June, the “Quantitative Un-Easing” plan, could begin at any point this year with the reduction of $4 billion a month in MBS. The pace of MBS sales would increase by $4 billion each quarter up to a maximum of $20 billion per month.

“…what the Fed giveth the Fed has the power to taketh away. Selling MBS decreases demand and puts upward pressure on mortgage rates.”

The Fed’s MBS buying spree increased investor demand for mortgage-backed securities at a time when it was faltering, which, in turn, helped push mortgage rates down. We can, in large part, thank the Fed for the 4 percent-or-less mortgage rates the market has experienced in recent years. Quantitative Easing, particularly MBS purchases, helped homeowners lower monthly payments and encouraged investment in housing to stop house prices from falling even further during the housing crisis.

Yet, what the Fed giveth, the Fed has the power to taketh away. Selling MBS decreases demand and puts upward pressure on mortgage rates. According to Fannie Mae’s estimation, the increase ranges from 25 to 40 basis points.

As the Fed tightens monetary policy, the expectation is that mortgage rates will increase. What does this mean for consumers? After all, rising rates makes housing less affordable, right? Well, that depends upon whether you are a potential first-time homebuyer or an existing homeowner. So, let’s look at what might happen for each separately.

If you are among the nearly two-thirds of U.S. households that is already an existing homeowner, does an increase in the mortgage rate make homeownership less affordable? Keep in mind that the vast majority of existing homeowners either own their homes without a mortgage, or have a 30-year, fixed-rate mortgage. Therefore, an increase in the mortgage rate will have no impact on the majority of existing owners. The best strategy for almost two-thirds of all households in the country is…wait for it…do nothing because nothing has changed.

However, the story is different for potential first-time homebuyers, which are among the other one-third of households. Remember that the price of a home does not determine if it is affordable for a homebuyer. Rather, how much it costs each month to pay for the mortgage necessary to purchase the home given a down payment determines if it is affordable. The amount a homebuyer can afford to borrow is determined by their income and the mortgage rate. The higher your income, the more you can afford. The lower the interest rate, the more you can afford. So, changes in income and interest rates influence the consumer’s house-buying, or purchasing power. 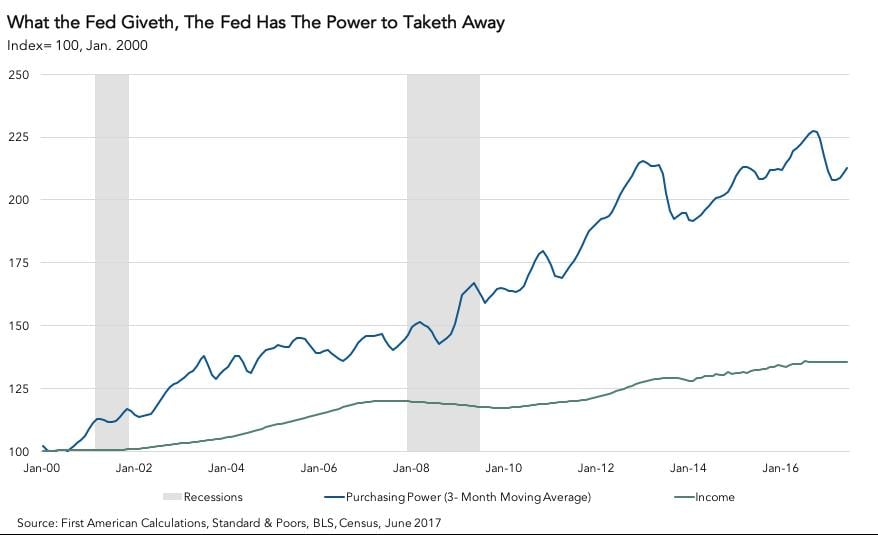 Household incomes have grown only modestly since 2000. However, the combination of income growth and declining mortgage rates has more than doubled consumer house-buying power. The Fed’s quantitative easing definitely helped!

According to our Real House Price Index (RHPI), consumer house-buying power declined 3.5 percent in June compared to a year ago, largely because mortgage rates have increased. Yet, the first-time homebuyer can afford to buy more today than at any time in recent memory, and the existing homeowner continues to benefit from the ability to refinance their existing mortgage at historically unprecedented levels.