Will Higher Mortgage Rates Bring Normalcy to the Housing Market?

“The frenzy of the pandemic-era housing market appears to be the historical exception, not the rule. The housing market is adjusting to a not-so-new normal.”

Mortgage rates increased significantly in April. The jump in mortgage rates came as the Federal Reserve signaled it would soon tighten monetary policy to intensify its fight against inflation.

What’s the Fed Got to do with It?

The Federal Reserve is actively trying to tame inflation and recently announced a 50-basis point increase in the federal funds rate. The Fed will also begin quantitative tightening in June, announcing it will let $30 billion of Treasury bonds and $17.5 billion of mortgage-backed securities mature each month through August. How inflation and the broader economy respond to the Fed’s monetary policy tightening will influence further Fed action. If inflation doesn’t decline as expected, the Fed may feel the need to more aggressively increase the federal funds rate and the pace of quantitative tightening, which may put further upward pressure on mortgage rates.

Rising mortgage rates impact housing market potential in two ways -- reducing affordability and increasing the number of homeowners’ that are rate locked-in. While these forces may reduce existing-home sales, they will also bring much-needed balance to the housing market.

Higher rates reduce affordability: In April 2022, the average 30-year, fixed mortgage rate was 4.98 percent, which is almost two percentage points higher than one year ago. Holding household income constant at its April 2021 level, the increase in the average mortgage rate since last April reduced house-buying power by nearly $96,000. However, household income increased by 5 percent year over year, which helped ease the loss in house-buying to $77,000. The year-over-year decline in house-buying power reduced housing market potential by nearly 380,000 potential home sales. Even though that is a significant decline in the potential number of home sales, it is relative to an unusually high level of potential sales in April 2021, which were fueled by pandemic-driven demand and historically low mortgage rates. Comparing today’s potential home sales levels to April 2019, before the pandemic, provides some helpful perspective. In fact, the market potential for existing-home sales is approximately 230,000 above the pre-pandemic benchmark of April 2019. 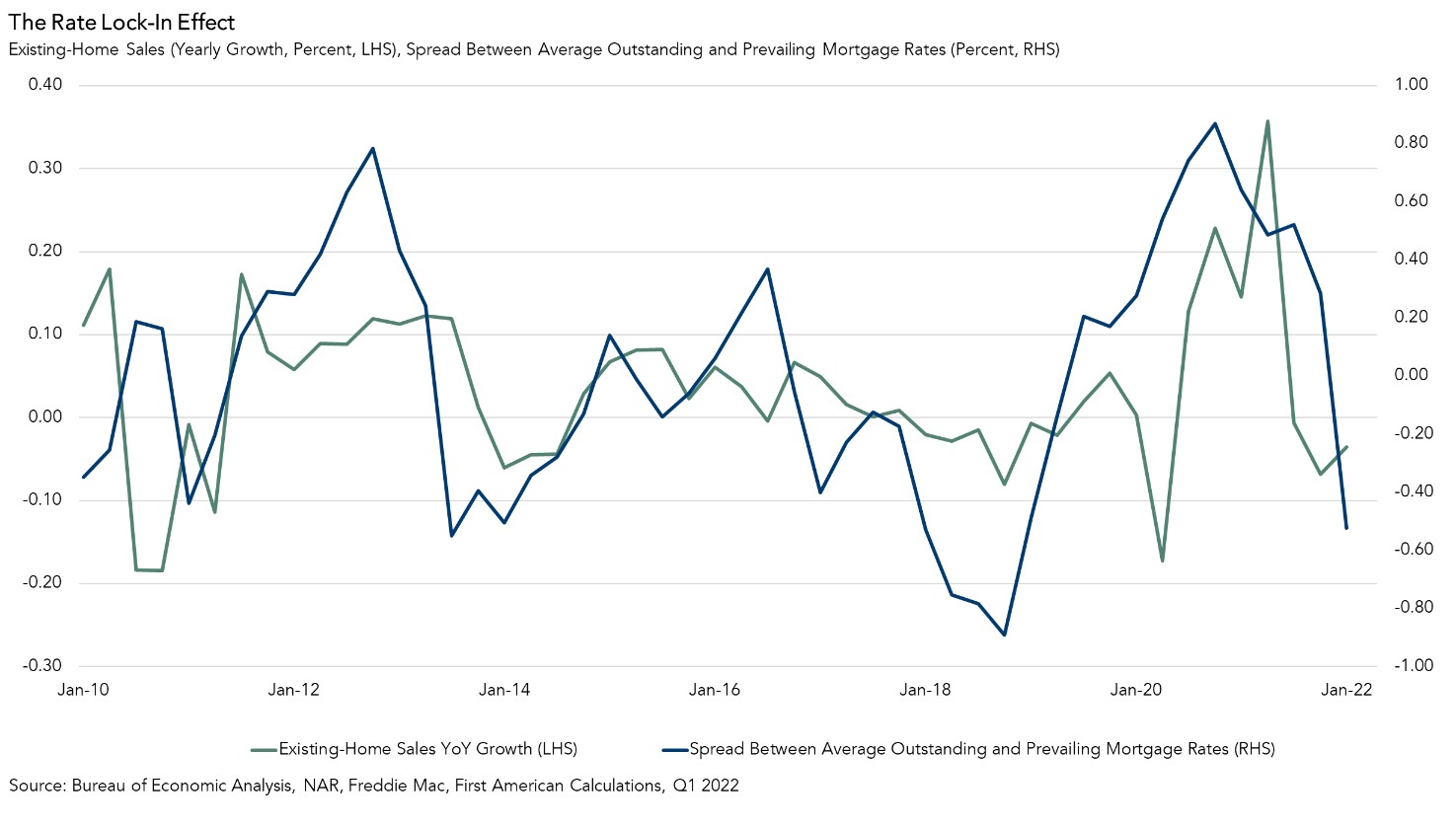 A Return to Not-So-New Normal

The frenzy of the pandemic-era housing market appears to be the historical exception, not the rule. Recency bias may have many believing that mortgage rates below 4 percent is normal, but it is anything but normal from a historical perspective. In fact, the historical average for the 30-year, fixed mortgage rate is nearly 8 percent. The rate lock-in effect will constrain supply below demand, making real house price declines unlikely. The good news for potential home buyers is that rising mortgage rates may help to cool the rapid pace of house price appreciation as some potential buyers will pull back from the market. As higher mortgage rates slow the housing market from its 150-mile-per-hour pace to something more in the line with its historical speed limit, sellers’ market conditions should ease and home buyers will benefit from a not-so-new normal.

For the month of April, First American updated its proprietary Potential Home Sales Model to show that: