The Loan Application Defect Index for purchase transactions continued its upward trend, increasing 5.6 percent in January compared with the month before, the fifth consecutive month defect risk in purchase transactions has risen. Overall, the frequency of defects, fraudulence and misrepresentation in the information submitted in mortgage loan applications increased by 4.6 percent compared with the previous month. While overall fraud risk has been on the rise since July 2018 due partially to the impact of natural disasters, the last two months have experienced an acceleration in fraud risk—what could be driving this change?

“The overall rise in purchase and refinance applications, coupled with strong first-time home buyer demand and tight inventory, bodes well for an early spring home-buying season, but may contribute to further increases in defect risk.”

Surprisingly, mortgage rates declined in December and continued falling into January, reaching their lowest levels since April 2018. Prospective home buyers and existing homeowners reacted to the lower rates, resulting in a mini-boom in mortgage applications, both purchase and refinance. In fact, according to the Mortgage Bankers Association, overall mortgage application volume increased 23.5 percent for the week ending on January 4, 2019. The decline in mortgage rates spurred a flurry of refinance activity, with refinance applications surging 35 percent week-to-week to their highest level since July 2018. Similarly, mortgage purchase applications jumped 17 percent. 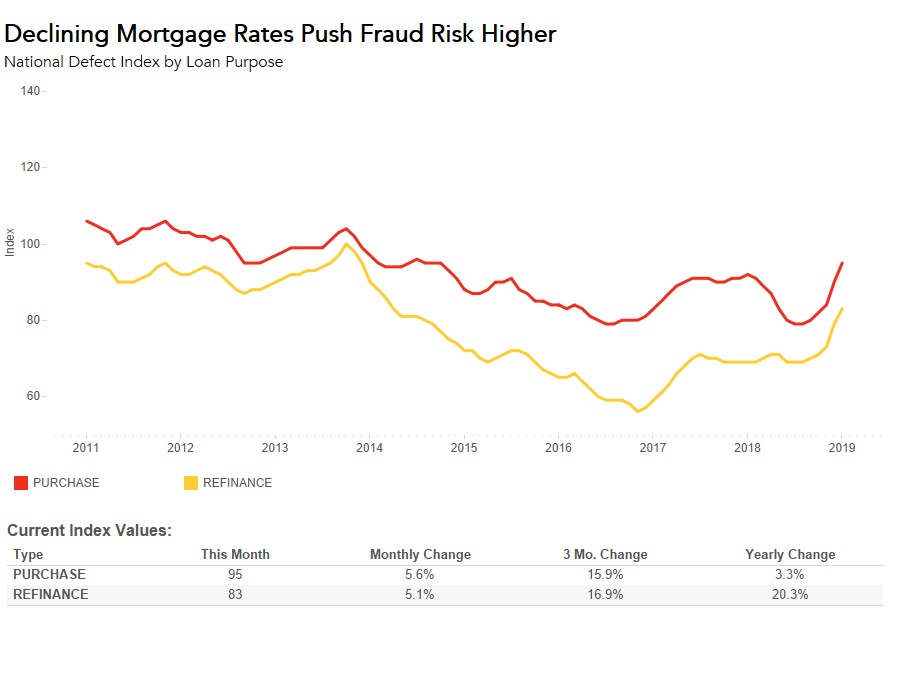 The overall rise in purchase and refinance applications, coupled with strong first-time home buyer demand and tight inventory, bodes well for an early spring home-buying season, but may contribute to further increases in defect risk. Historically, purchase transactions tend to be more at risk of defects, fraud and misrepresentation, and the pressures resulting from rising demand and a strong sellers’ market compounds that risk. When home values are rising and the housing market is competitive, more buyers want to enter the market. As a result, misrepresentation and fraud are more likely on a loan application.

Last week, mortgage rates fell even further to 4.35 percent, their lowest level since February 2018. As home buyers continue to take advantage of this lower rate environment amid a very competitive market, we can expect fraud risk will continue to trend higher.