Why Housing Market Potential Increased for the Second Straight Month

Housing market potential closed 2022 on a two-month upswing, increasing by 3.0 percent relative to November. Despite the second consecutive month-over-month uptick, housing market potential remained down 17 percent compared with December of last year, a decline of 1,065,000 potential existing-home sales. The steep annual decline in market potential was largely a result of higher mortgage rates, which prevent both buyers and sellers from jumping into the market. While rates remain significantly higher compared with one year ago, they have retreated for two consecutive months, improving affordability. However, although lower mortgage rates have helped improve affordability, housing supply remains limited, and you can’t buy what’s not for sale.

"Although lower mortgage rates have helped improve affordability, housing supply remains limited, and you can’t buy what’s not for sale."

Lower Mortgage Rates Bring Some Buyers Back to the Market

Compared with the previous month, the average 30-year, fixed mortgage rate eased by nearly half a percent while incomes increased, which boosted house-buying power by $16,000, fueling an increase in housing market potential by 87,000 home sales. While house-buying power remains $141,000 lower than one year ago, house buyers are rate sensitive and the incremental improvement in house-buying power is enough to entice some buyers back into the market. Mortgage applications, which are a leading indicator of home sales have increased for two consecutive months as mortgage rates have softened. From a financial perspective, the decision to buy a home comes down to a payment-to-paycheck calculation, and lower rates may help to reduce the mortgage payment while higher incomes can increase one’s monthly paycheck. 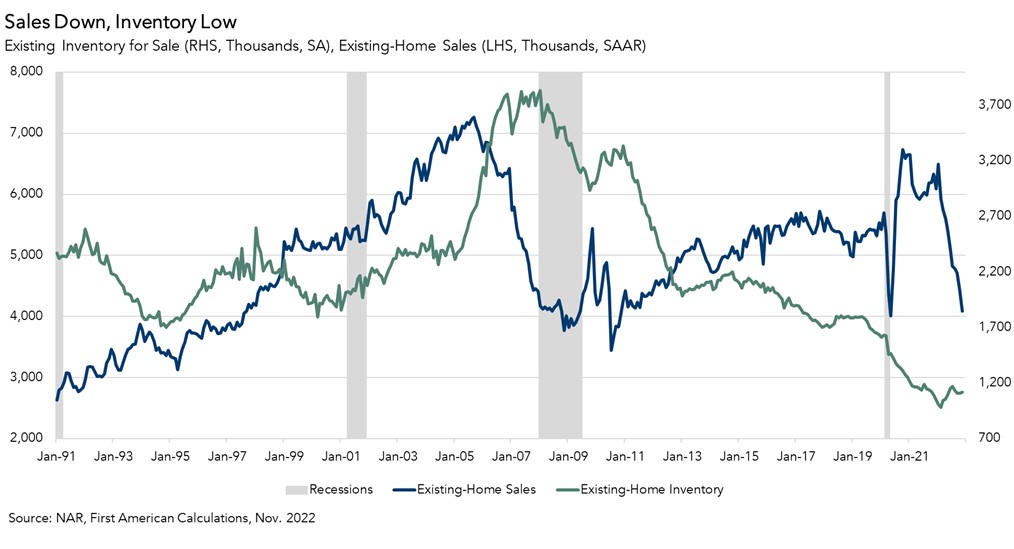 While housing market potential increased in December, two dynamics are keeping existing-home inventory historically low – rate-locked existing homeowners and the fear of not finding something to buy. As of the third quarter of 2022, 93 percent of outstanding mortgages have a rate at or below 6 percent, leaving many existing homeowners in a position where it would cost more to borrow the same amount of money they owe on their current mortgage, which prevents them from listing their home for sale and adding supply to the market. Additionally, for those existing homeowners considering the possibility of listing their home for sale, they must first contend with finding something to buy. As a result of these dynamics, the average length of time that homeowners remain in their home reached a historic high of 10.62 years in December, reducing housing market potential by 9,600 sales compared to the previous month.

While existing-home inventory remains limited, the silver lining for home buyers is that new-home inventory is on the rise, and a new home at the right price is a pretty good substitute. The National Association of Home Builders reported that nearly two-thirds of builders were offering incentives, including mortgage rate buydowns, paying points for buyers and price reductions, which could entice potential home buyers.

Housing Market’s Deep Freeze May Thaw in Months Ahead

Supply and demand dynamics determine the outlook for home sales. From a financial perspective, affordability is improving as mortgage rates have declined and incomes have increased. It's also important to note that, while mortgage rates are highly influential, they are not the only factor affecting the decision to buy a home. A large cohort of millennials are reaching prime buying age, and the new normal likely includes greater flexibility to work from home, helping to fuel demand for homes. However, you can’t buy what’s not for sale. Inventory remains low, giving potential buyers and sellers few options to choose from as we enter 2023. The good news is that new-home inventory is on the rise, and total inventory usually picks up heading into the spring season. The residential housing market suffered a deep freeze in the winter months of 2022, but there is reason to believe that it will begin to thaw as the spring home-buying season approaches.

For the month of December, First American updated its proprietary Potential Home Sales Model to show that: