What Does Increasing Tenure Length Mean for the Housing Market?

The housing market essentially reached its potential in July 2019, as actual existing-home sales were 0.05 percent above the market’s potential. Existing-home sales in 2019 are running at a pace similar to 2015, even though rates have fallen and household income has increased this year. Housing market potential benefitted from a 10.6 percent year-over-year increase in consumer house-buying power in July, as the 30-year, fixed-rate mortgage, an important component of consumer house-buying power, fell to its lowest point since November 2016.

“It’s clear that demand for existing homes is strong, but one can’t buy what’s not for sale. Declining mortgage rates could be the factor that moves the needle for those that still feel rate-locked in.”

Despite the affordability boost, the market potential for existing-home sales fell 0.3 percent this month compared with last month and dropped 1.2 percent compared with one year ago. How can the market potential fall when house-buying power remains at near-record levels? The key point to remember about the housing market is that the buyer and the seller are often one and the same household.

Based on our dynamic simulation Potential Home Sales Model, there are several forces shaping housing market potential today. Rising new household formation, which is an indicator of growing demand for housing, added approximately 95,000 more potential home sales compared with one year ago. 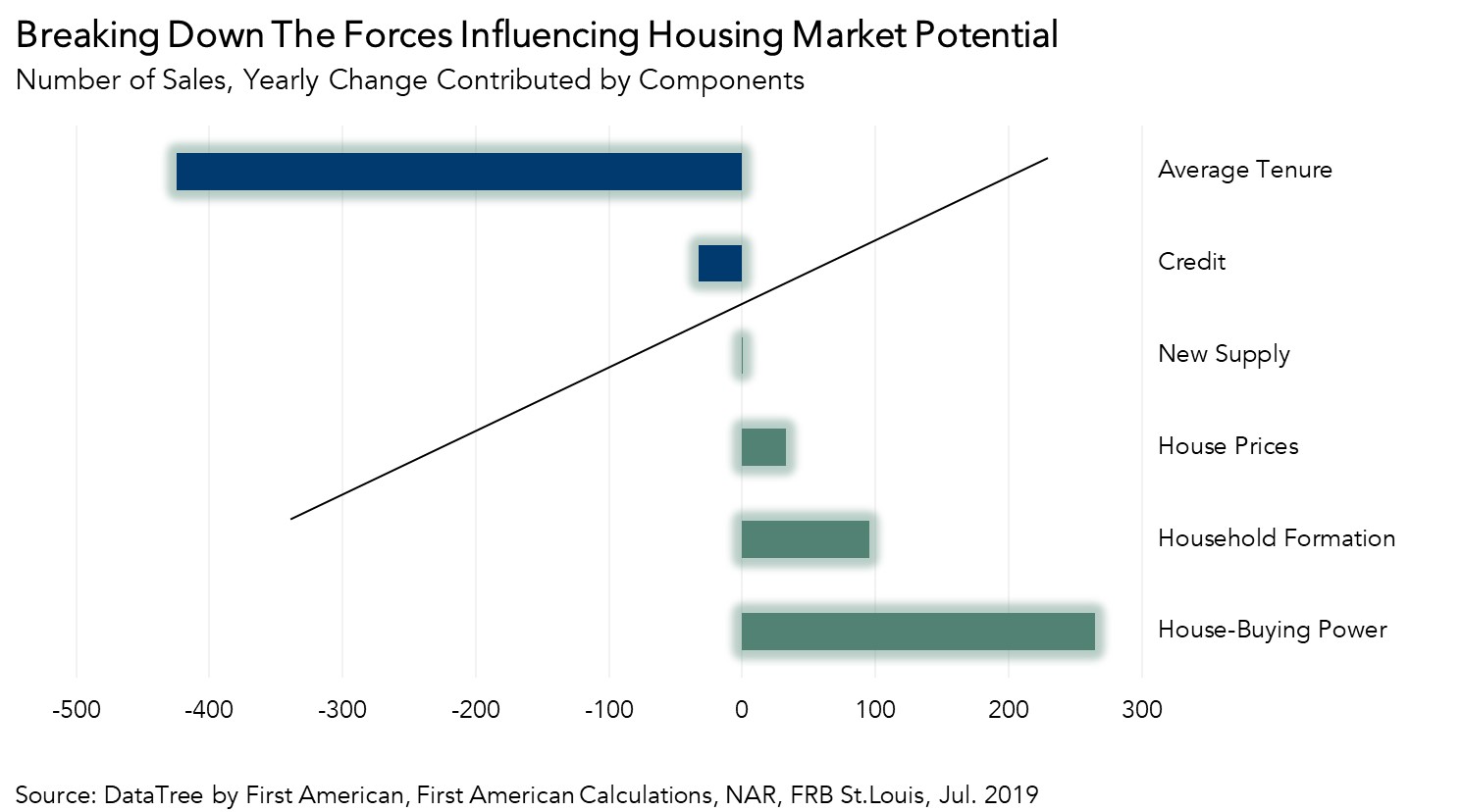 There are positive signs ahead, however. Increasing tenure length is largely the result of the rate “lock-in” effect, and seniors aging in place. In the latest Freddie Mac weekly report of mortgage rates, the 30-year, fixed mortgage rate was 3.6 percent, approaching the lowest mortgage rate in history of 3.3 percent, which occurred in 2012. Additionally, existing homeowners are sitting on $5.7 trillion of tappable equity, money which could be used to fund the purchase of a move-up home. If mortgage rates remain this low, more existing-home owners may be enticed to move. It’s clear that demand for existing homes is strong, but one can’t buy what’s not for sale. Declining mortgage rates could be the factor that moves the needle for those that still feel rate-locked in.

For the month of July, First American updated its proprietary Potential Home Sales Model to show that: