The Housing Market is Slowing by Design, But Don't Expect a Bust

In March 2022, the Real House Price Index (RHPI) increased 32.5 percent year over year, which is the fastest growth in the more than 30-year history of the series. This rapid annual decline in affordability was driven by two factors: a 21.6 percent annual increase in nominal house prices and over a full percentage point increase in the 30-year, fixed mortgage rate compared with one year ago. Even though household income increased 4.9 percent since March 2021 and boosted consumer house-buying power, it was not enough to offset the affordability loss from higher mortgage rates and fast-rising nominal prices.

"History has shown that rising mortgage rates may take the steam out of rising house prices, but they don’t necessarily trigger a decline.”

Reduced affordability prompts some buyers to pull back from the market and sellers to adjust their price expectations. The housing market is slowing down by design as the Federal Reserve tightens monetary policy in order to tame inflation. Early data signals the housing market is normalizing -- our preliminary nominal house price index for the months of April and May indicates annual house price growth is decelerating. Historical data provides helpful perspective on how house prices react to rising mortgage rates.

In the longest rising mortgage rate era, 1998-2000, nominal house prices remained elevated as the economy continued to recover from the previous recession. This period was defined by tight labor markets, low inflation, and a higher minimum wage - all contributing to a healthy housing market. In just over a year and a half, house prices increased nearly 14 percent during this era. In the most recent rising mortgage rate era from 2017 through 2018, nominal house prices increased approximately 7 percent over a 15-week period. 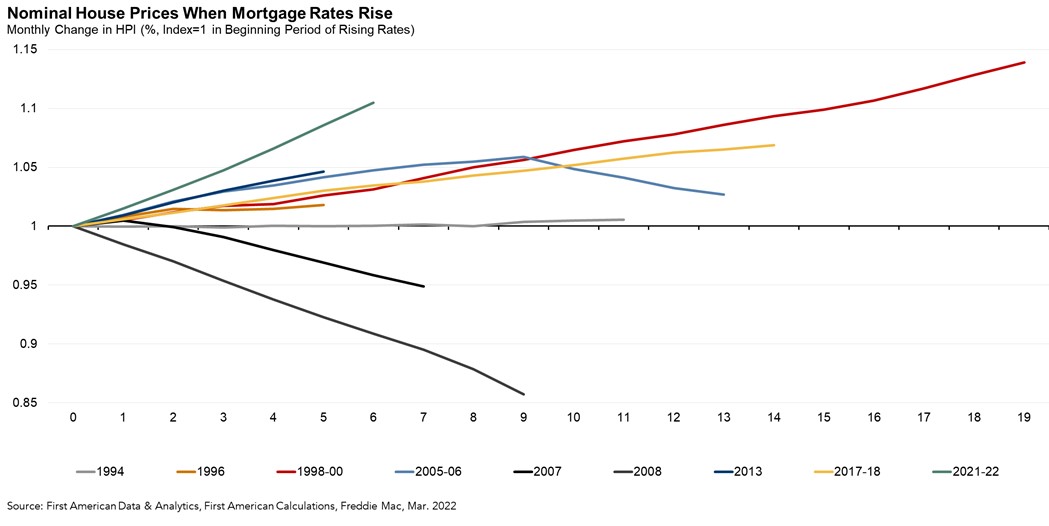 Supply-Demand Imbalance Keeping the Pressure On

For more analysis of affordability, please visit the Real House Price Index. The RHPI is updated monthly with new data. Look for the next edition of the RHPI the week of June 27, 2022.