What Does Faster Inflation and Rising Mortgage Rates Mean for Housing?

Healthy economic growth and a strong labor market are increasing the risk of rising inflation, which increases the likelihood the Fed will raise rates faster than currently expected. The latest jobs’ report indicated a strong start to 2018, with total non-farm payroll employment increasing by 313,000. Impressively, the labor market strength was broad-based, as all industries experienced job gains in February. The robust job market is gradually putting upward pressure on compensation, with wages up 2.6 percent compared with a year earlier.

“The fate of consumer house-buying power in 2018 will depend on the tug-of-war between rising household income and inflation-driven pressure on mortgage rates.”

So, if the rate of inflation accelerates and the Fed reacts with more rate increases, what does that mean for housing? Rising inflation will also push up long-term bond yields to compensate investors for the higher level of inflation. For example, the yield on the 10-year Treasury note has already climbed about 0.6 percent since the start of the year on the expectation of rising inflation. Mortgage rates follow the same path as long-term bond yields. According to data released by Freddie Mac last week, the 30-year, fixed-rate mortgage rate increased to 4.43 percent, up 0.5 percent from the beginning of the year and the eighth consecutive week of rising mortgage rates. A higher mortgage rate means reduced house-buying power.

However, the root cause of higher inflation and rising mortgage rates is surging wage growth. In fact, our estimate of average household income, based on Census and Bureau of Labor Statistics data, is the highest it has ever been. On the other hand, 30-year, fixed-rate mortgage rates remain near historical lows. It’s important to keep in mind that in the 40 years preceding the Great Recession, the housing market never experienced mortgage rates as low as they are today. 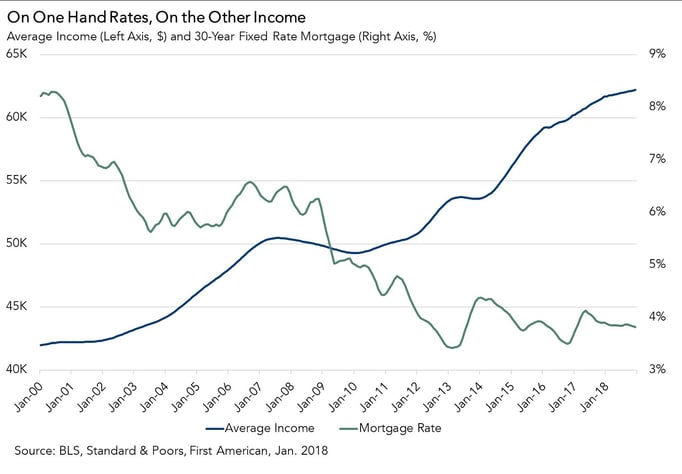