The Price of Admission to Homeownership

Will Janet Yellen’s Christmas gift to the housing market be a rate increase on December 16?  According to the CME Group FedWatch tool, the probability that the Federal Reserve will raise interest rates for the first time since 2006 is now over 80 percent.  For perspective, let’s think about 2006: the iPhone did not exist, MySpace was the leading social media network, and Twitter had yet to be launched.  So, yes, it’s been a while.

Check out this great animated video clip by the The New York Times for a primer on what the Fed does to raise interest rates and how that impacts the economy.

“The time for rock-bottom mortgage rates needs to end and the end of this era will only have a very modest impact on affordability for the first-time homebuyer.”

What is the Fed waiting for?  The November employment report showed continued strong growth in job formation, a 5 percent unemployment rate and even growth in average hourly earnings of more than 2 percent so far this year.  Furthermore, excluding energy prices, core inflation is on the rise and approaching the 2 percent target rate set by the Fed. The concerns about global risks and uncertainty cited by the Fed in September as a reason not to raise rates may now be outweighed by the growing strength of economic performance domestically.

One of the main reasons the Fed lowered rates to historic lows in the first place was to help stabilize the U.S. housing market and mitigate the destruction of wealth for middle-class Americans caused by falling home prices. Yet, house prices have been increasing, in some markets substantially, for a few years now and home sales have rebounded.  The housing market is ready and can withstand a rate increase as well.

According to the most recent homeownership data, almost two thirds of U.S. households are already homeowners, mostly financing their homes with fixed-rate loans. A rate increase has no impact on their cost of housing at all, unless they decide to move at some point in the future. Therefore, when we consider the impact of a rate increase on the housing market, the focus must be on the impact to the first-time homebuyer.

Consider a first-time homebuyer this fall buying a $250,000 home with a fixed-rate loan, 5 percent down payment and a Qualified Mortgage maximum debt-to-income ratio of 43 percent. First-time homebuyers are more likely to be young, so we assume that this Millennial household has student loan debt and possibly modest car and credit card payments amounting to 10 percent of his or her household income. Given the interest rate on a 30-year fixed-rate loan in November, the “price of admission,” or the minimum income needed to qualify to buy that home, was $41,000. 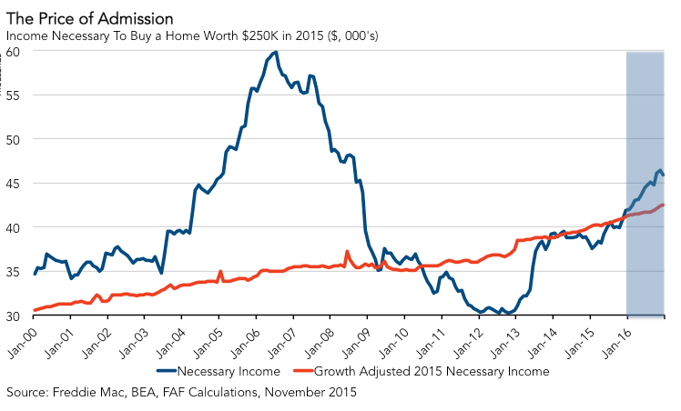 To forecast the necessary income required to buy the Millennial’s first home in 2016 if the Fed increases interest rates, we need to know what house prices will do in response to the rate change. In September, using our dynamic housing market simulation model, we tested the influence of a mortgage rate increase shock of 25 basis points to simulate what could happen because of Federal Reserve rate increase. The complete analysis can be found here.

Under the expectation of a Fed rate increase, we estimate year-over-year appreciation in 2016 to be just over 4 percent. The cost of the first-time homebuyer’s 2015 $250,000 home will rise to $260,000 by the end of next year. Additionally, we estimate that the mortgage interest rate will increase to 4.5 percent. The combined effect of rising rates and rising prices increases the monthly payment necessary to buy the first-time homebuyer’s home by $125.  The new level of necessary income increases $5,000, to $46,000.  This can be seen in the shaded area of the figure.

But don’t forget, part of the reason the Fed may choose to raise rates this week is because of increasing inflation and a strengthening labor market.  All of which increases the pace of income growth.  Assuming that the Millennial homebuyer’s income rises by 3 percent in 2016, increasing their income from $41,000 to $42,500, the income growth helps, but does not fully offset the increase in the price of admission. In this scenario for 2016, affordability declines by $3,500.

By comparison, if the Fed doesn’t choose to increase short-term interest rates, the mortgage rate is still expected to rise to around 4.25 percent and house prices are expected to grow at a slightly faster rate of 5 percent.  So, even in the unlikely event that the Fed didn’t raise rates in 2016, the necessary income to buy today’s first-time homebuyer’s house would increase to $45,000 and affordability would decline by almost $2,700.

With or without Federal Reserve intervention, the income a first-time homebuyer will need to buy today’s starter home a year from now will increase. Yet, we estimate the difference to be only $700 dollars more in the likely event that the Fed starts to raise rates. The price of admission into homeownership is going to rise, in part because of the leverage-assisted asset inflation caused by the low rate environment!  The time for rock-bottom mortgage rates needs to end and the end of this era will only have a very modest impact on affordability for the first-time homebuyer.