Affordability Declines to its Lowest Level since 2007

In April 2022, the Real House Price Index (RHPI) jumped up by 45.6 percent compared with a year ago, accelerating faster than any other point in the 30-year history of the series. This rapid annual decline in affordability was driven by two factors: a 21.2 percent annual increase in nominal house prices and a 1.9 percentage point increase in the average 30-year, fixed mortgage rate compared with one year ago.

“The pandemic-driven supply and demand imbalance that fueled historically strong house price appreciation is coming to an end as the housing market rebalances to a new normal.”

For home buyers, there are few options to mitigate the loss of affordability caused by the increase in mortgage rates and home prices. One way to offset the decline in affordability is with an equivalent, if not greater, increase in household income. Household income increased 5.0 percent since April 2021 and boosted consumer house-buying power, but even the strong year-over-year income growth was not enough to offset the affordability loss from higher rates and fast-rising nominal prices. Alternatively, another option for home buyers to mitigate the loss of affordability is to switch to an adjustable-rate mortgage with a lower rate than the fixed-rate benchmark. In fact, the share of adjustable-rate mortgages relative to fixed-rate mortgages has grown as mortgage rates have increased in recent months.

In April, affordability on both a year-over-year and month-over-month basis declined at its fastest pace in the series’ history. However, real estate is local and house-buying power and nominal house prices vary by city, so it’s helpful to know where affordability declining the most and the least.

The Five Cities Where Affordability Declined the Most and the Least

Where Affordability Declined the Most Year Over Year

Where Affordability Declined the Least Year Over Year 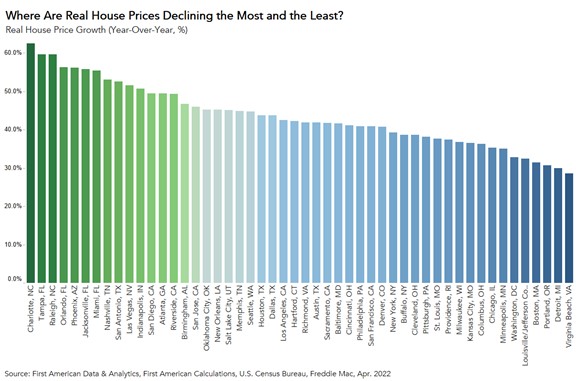 In April, affordability declined the most year over year in Charlotte, N.C., mostly due to the nearly 28 percent annual increase in nominal house price growth. The strong investor activity and net-in migration in Charlotte increased demand for homes against a limited supply of homes for sale. The second greatest year-over-year decline in affordability occurred in Tampa, Fla., but was driven by annual nominal house price growth of 37 percent, a greater increase in house prices than in Charlotte.

Comparing the decline in affordability in Charlotte with Tampa illustrates the importance of shifts in household income. While annual house price appreciation in Tampa outpaced that of Charlotte, the decline in affordability was tempered by growth in household income. Ultimately, the common dynamic across all 50 markets tracked in the RHPI is that nominal house price appreciation outpaced house-buying power.

What Do These Dynamics Mean Looking Ahead?
Housing affordability is rapidly declining, and our preliminary nominal house price index estimates for May and June indicate that house price growth is already moderating as potential buyers are pulling back from the market. The pandemic-driven supply and demand imbalance that fueled historically strong house price appreciation is coming to an end as the housing market rebalances to a new normal. Yet, the rebalancing will differ from city to city based on localized shifts in supply and demand and income levels.

For more analysis of affordability, please visit the Real House Price Index. The RHPI is updated monthly with new data. Look for the next edition of the RHPI the week of July 18, 2022.