Where is Housing Overvalued?

Housing affordability continued its rapid annual decline in July 2022, as nominal house prices increased 16.7 percent year over year and the 30-year, fixed mortgage rate increased 2.5 percentage points compared with a year ago. The decline in affordability is reflected in the Real House Price Index (RHPI) jumping up by nearly 54 percent on an annual basis. For home buyers, there are few options to mitigate the loss of affordability caused by a higher mortgage rate and rising prices. One way to offset the decline in affordability is with an equivalent, if not greater, increase in household income. Another option is choosing an adjustable-rate mortgage (ARM), which typically has a lower rate than a 30-year, fixed-rate mortgage. Even though higher household income and ARMs help to increase consumer house-buying power, they’re not enough to offset the affordability loss from higher rates and fast-rising nominal prices in July.

“While the markets considered overvalued may need to adjust to the not-so-new reality of higher mortgage rates, housing market fundamentals still support a moderation of annualized house price appreciation rather than a sharp decline.”

As affordability wanes, would-be buyers are pulling back from the market, prompting annual house price appreciation to moderate. Annual house price growth peaked in March at nearly 21 percent but has since decelerated to a still-high 16.7 percent in July. As the housing slowdown continues, the pace of house price moderation will vary market to market, with prices decelerating faster in some markets than in others. By analyzing which markets are considered overvalued, we can identify the markets at risk of more rapid price deceleration.

Where is Housing Overvalued?

If housing is appropriately valued, house-buying power should equal or exceed the median sale price of a home. As of July, most of the top 50 markets we track remain undervalued by this measure, some significantly undervalued. For example, Detroit, Philadelphia, and Pittsburgh are markets considered undervalued by nearly $200,000.

However, real estate is local and not all markets are created equal. There were 15 markets considered overvalued in July, meaning the median existing-home sale price exceeded house-buying power. One year ago, only four markets were considered overvalued. San Jose, Calif. was the most overvalued market. The median consumer house-buying power in San Jose in July was just over $770,000, barely more than half of the median sale price of a home at $1,460,000. Consequently, annual house price growth is adjusting in San Jose. Price growth peaked at 19.4 percent in February 2022, but has since decelerated quickly to 4.6 percent in July – the second fastest deceleration in prices among all the top 50 markets we track, just after Sacramento.

Overvaluation was calculated based on July 2022 house prices and mortgage rates, but mortgage rates have drifted higher since then. If we hold household income and median sale prices constant at their July 2022 levels, the increase in the average 30-year, fixed mortgage rate from 5.4 percent in July to 6 percent in September, increases the number of overvalued markets by four, adding San Antonio, Miami, Tampa, Fla., and Salt Lake City to the list and bringing to the total to 19. 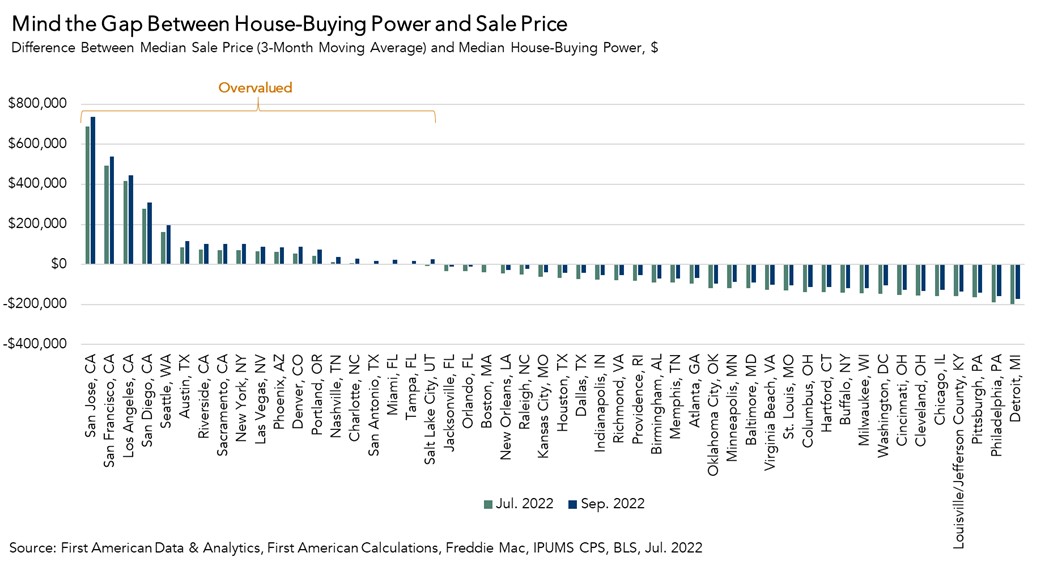 Where Does the Housing Market Go from Here?

Housing overvaluation is a function of three factors: house prices, household income, and mortgage rates. First American Data & Analytics’ preliminary nominal house price index indicates that house price deceleration is likely to continue in September. Meanwhile, median household incomes are expected to continue to rise, as the supply and demand imbalance in the labor market persists, putting upward pressure on wages. While mortgage rates are expected to continue to drift higher over the coming months, much of the rapid increase in rates is likely behind us. While the markets considered overvalued may need to adjust to the not-so-new reality of higher mortgage rates, housing market fundamentals still support a moderation of annualized house price appreciation rather than a sharp decline.

Nationally, while month-over-month house prices may decline, annual house price declines are not expected, given the ongoing supply-demand imbalance and continued strength in the labor market. Prior to the pandemic, the historical average for annual house price growth was just below 4 percent so, as the market adjusts to a not-so-new normal pace of appreciation, some buyers who backed out due to the frenzy of the super sellers’ market may jump back in.

For more analysis of affordability, please visit the Real House Price Index. The RHPI is updated monthly with new data. Look for the next edition of the RHPI the week of October 17, 2022.