“Data on the movement of unadjusted house prices during the early spring home-buying season won’t be available for a few more months, but it’s quite likely that price appreciation will accelerate again.”

While we know that rising household income and a decline in mortgage rates caused real house price appreciation to slow nationally, real house prices declined in a few markets. Compared with a year ago, six cities saw year-over-year declines in the RHPI, signaling an improvement in affordability: 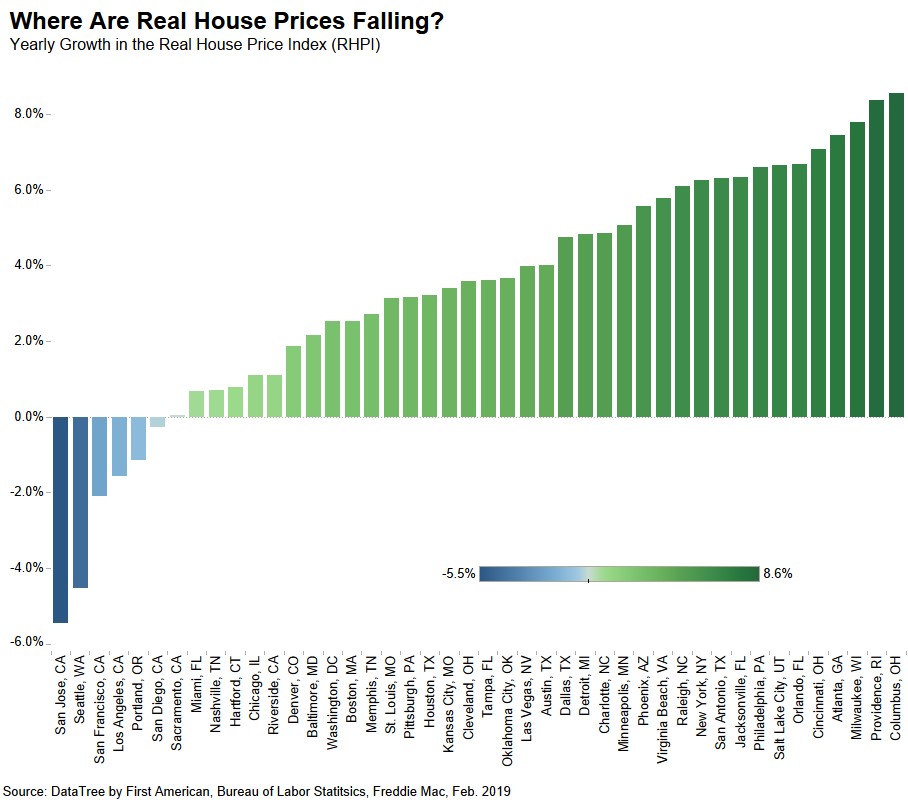 These coastal markets all have something in common: they were the tightest and hottest markets of 2018. In the first half of 2018, rising millennial demand amid a backdrop of limited inventory and increasing mortgage rates put pressure on affordability, causing buyers to take a step back. But now, affordability is on the rise and the main reason is rising inventory.

According to First American calculations of Realtor.com February 2019 data, the number of listings in San Jose, Seattle and San Francisco increased 124 percent, 89 percent and 52 percent respectively compared with one year ago. As inventory enters the market, buyers have more options, bidding wars are less likely, and sellers are more likely to reduce list prices. In fact, these three markets experienced the greatest yearly growth in the number of listings with price reductions.

These six markets may signal a broader shift in the housing market. Across the nation, home buyers are benefiting from lower-than-anticipated mortgage rates, rising wages and a slowdown in unadjusted house price appreciation. Only the six markets above showed a year-over year decline in the RHPI, but 37 out the 44 top markets that we track showed month-over-month declines in the RHPI in February.

However, while these trends help home buyers, it’s too soon to call it a buyers’ market. Unadjusted house prices are still rising and it’s clear that demand continues to outstrip supply in most markets. Data on the movement of unadjusted house prices during the early spring home-buying season won’t be available for a few more months, but it’s quite likely that price appreciation will accelerate again.

The RHPI is updated monthly with new data. Look for the next edition of the RHPI the week of May 27, 2019.