How will the Housing Market Fare as Rates Rise?

“Context matters for purchase demand. The economy is improving, and millennials continue to age into their prime home-buying years in large numbers, so the context remains good for the housing market.”

The declining 30-year, fixed mortgage rate has been one of the most important driving forces of both purchase and refinance activity for the last 40 years. Holding income constant, when market mortgage rates are lower than the rate at the time of a borrower’s last purchase or refinance, the borrower can borrow the same amount for less. Today, the expectation is that mortgage rates are likely to continue rising as the Federal Reserve slows their bond buying, the economic recovery continues, and inflation remains elevated. Higher mortgage rates will mean consumer house-buying power, all else equal, will decline and it will cost a borrower more per month to buy their “same home” or refinance.

As we enter this rising-rate environment, examining how existing-home sales, refinances and house prices reacted in previous rising-rate eras can provide valuable insight into how today’s housing market may react as rates rise. 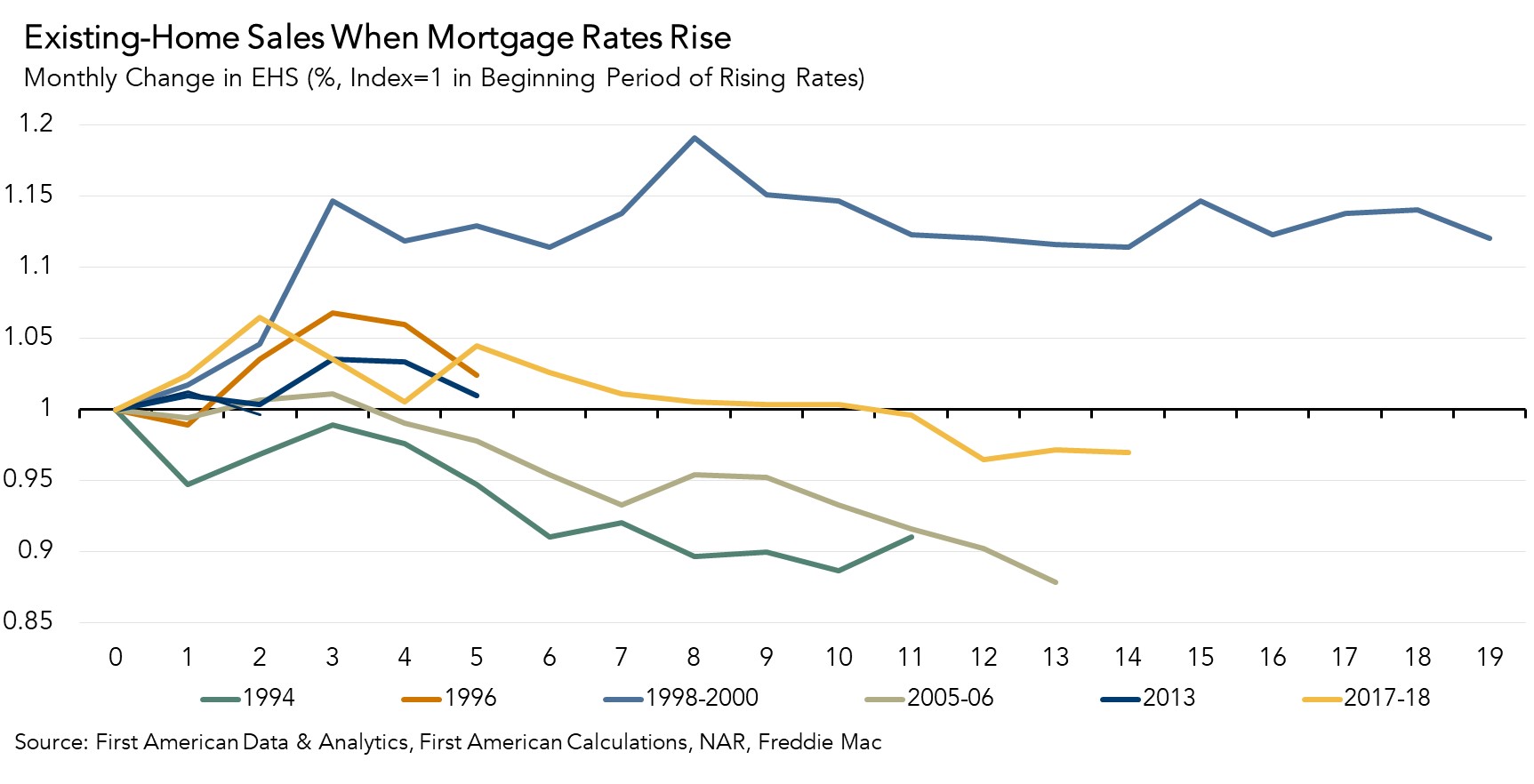 Refinance Applications When Mortgage Rates Rise: The same resiliency cannot be said of refinance mortgage demand. In each rising-rate era, refinance applications fall, which is not surprising, as the decision to refinance is typically a strictly financial one. When mortgage rates rise, there are fewer borrowers who are “in the money” to refinance.

House Prices When Mortgage Rates Rise: House prices are more resistant to rising mortgage rates. Apart from the 1994 rising-rate period, when house prices declined slightly and briefly, house prices have always continued to rise, albeit more slowly, when rates have increased. In the 2005-2006 housing bubble, house prices eventually declined after initially increasing, but never declined below the level at the beginning of the rising-rate era. House price appreciation is resistant to rising mortgage rates primarily because most home sellers would rather withdraw from the market than sell at lower prices – a phenomenon we refer to as “downside sticky.”

Context Matters
It is not a foregone conclusion that rising rates will reduce sales or prices this time, but it is likely that refinances will suffer. When it comes to purchase demand, one must consider what else is going on in the economy that influences buyers’ decisions. If rates increase because of the strength of the post-pandemic economic recovery, that may boost the confidence of prospective buyers to purchase a home, even if it is more expensive to do so. The lesson? Context matters for purchase demand. The economy is improving, and millennials continue to age into their prime home-buying years in large numbers, so the context remains good for the housing market.