In February 2022, the Real House Price Index (RHPI) jumped up by nearly 31 percent. That’s the fastest growth in the more than 30-year history of the series. This rapid annual decline in affordability was driven by two factors: a 21.7 percent annual increase in nominal house prices and a nearly full percentage point increase in the 30-year, fixed mortgage rate compared with one year ago. Rising mortgage rates impact both housing supply and demand, limiting supply by reducing the propensity of homeowners to sell and flattening demand by reducing consumer house-buying power.

“The last two years were the exception, not the rule, and the housing market is adjusting to a not-so-new normal.”

For home buyers, the only way to mitigate the loss of affordability caused by a higher mortgage rate is with an equivalent, if not greater, increase in household income. Even though household income has increased 5.1 percent since February 2021 and boosted consumer house-buying power, it was not enough to offset the affordability loss from higher rates and rapidly rising nominal prices.

Rising mortgage rates and surging nominal house prices are expected to continue outpacing household income, so affordability will likely wane further nationally in the near term. One forecast, based on an estimate of when the 10-year Treasury yield will peak, suggests that the 30-year, fixed mortgage rate will likely peak between 5.0 and 5.7 percent, but may move as high as the low 6 percent range. So, let’s examine how these mortgage rate scenarios would impact house-buying power.

In the latest RHPI report reflecting February 2022 data, the 30-year, fixed mortgage rate stood at 3.8 percent. Since then, rates have increased sharply, breaking the 5-percent barrier in mid-April. The increase in rates since February reduced house-buying power by $60,000. If the average mortgage rate reached 5.5 percent, assuming a 5 percent down payment and average household income of approximately $70,800, house-buying power falls by an additional $21,000. If rates increased even higher to 6.0 percent, house-buying power would fall by $40,000 compared with 5.0 percent. 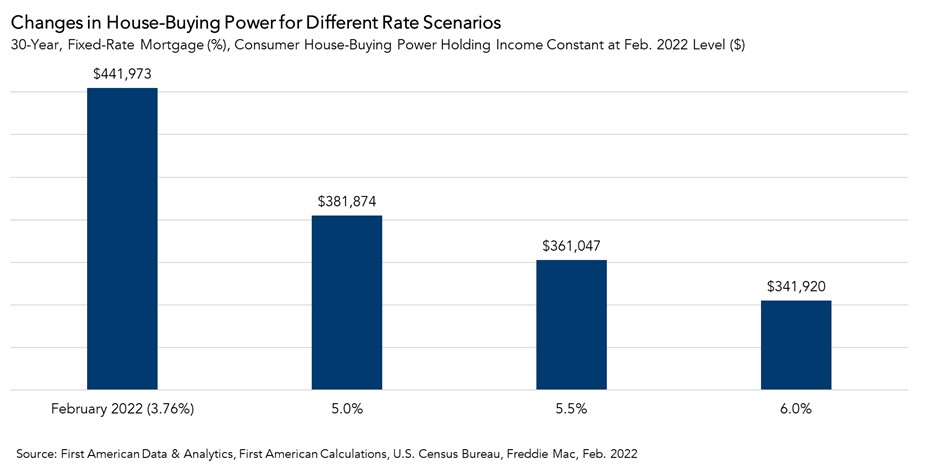 Rising mortgage rates impact affordability, but historical context is important. An average 30-year, fixed mortgage rate of 5.5 percent is still well below the historical average of nearly 8 percent. Even with mortgage rates at 5.5 percent, house-buying power is over $360,000, which is still strong and at the same level as 2018. Recency bias may have many thinking that rates below 3 percent and house-buying power above $450,000 is normal, but it is anything but normal from a historical perspective. The last two years were the exception, not the rule, and the housing market is adjusting to a not-so-new normal.

For more analysis of affordability, please visit the Real House Price Index. The RHPI is updated monthly with new data. Look for the next edition of the RHPI the week of May 30, 2022.