Home [ownership] for the Holidays

No matter your life stage, ‘tis the season to pack up your stuff and head home for the holidays. Home is where we congregate with family and friends over a hot meal, catch up on events, and maybe even ring in the New Year. But, home does not look the same for all. In fact, “home” doesn’t have to be the white picket fence with the smoking chimney in a quiet suburban neighborhood. Increasingly, for Millennials, home may be a rented apartment in the middle of the city.

In the first of our homeownership series, “Life, Liberty, and the Pursuit of Homeownership,” we discussed why homeownership is critical for wealth creation and upward mobility for the majority of low- and moderate-income households. But, who is more likely to go home to that white picket fence rather than the apartment, and why? In this part of the series, we will explore how homeownership is measured today and the mistaken causal relationships many continue to identify and propagate as conventional wisdom.

“Understanding the characteristics that influence how likely someone is to be a homeowner will help us better measure gaps in homeownership rates by characteristic and understand how to best support the pursuit of the American Dream.”

There are many characteristics that influence the likelihood someone is a homeowner. When analyzing the homeownership rate, it’s important to understand why these characteristics matter to the tenure choice decision.

First, let’s dispel the common “correlation is causation” myth. The homeownership rate today only measures the percentage of homes that are owned by their occupants. Researchers frequently subdivide this number by numerous characteristics, such as age or income. Oftentimes, the homeownership gaps among these subdivided groups are taken to mean that one characteristic makes someone more or less likely to be a homeowner. Unfortunately, this correlation is based on a simplistic view of homeownership. It only looks at one isolated characteristic of the potential homeowner at a time. It overlooks a combination of economic and demographic factors often correlated with one another that influence the likelihood someone is a homeowner, including economic conditions, ethnicity, age, marital status, the number of children in the household, educational attainment, employment status, and income level.

For example, typically, educational attainment is strongly correlated with income – more education often leads to more income. Higher income means an increased likelihood of owning a home. Similarly, a secure job with a steady income usually indicates a greater ability to save for a down payment and a greater likelihood of access to credit. In addition, people tend to settle down in a home once they are married and decide to have children. On average, this happens to most in their late 20s or early 30s – although Millennials are pushing this age threshold increasingly higher. Other factors, including gender, whether one lives in an urban or rural area, and where in the U.S. one resides are also relevant.

In summary, it can be misleading to infer a direct causal relationship on any one of these factors without considering the others. To overcome this dilemma, economists use a multi-dimensional analysis of relationships “ceteris paribus” – or all other things being equal or held constant.

For example, the population of the United States is in the midst of a demographic shift as Baby Boomers age out of homeownership and Millennials slowly age in. In fact, aging was responsible for approximately 1 percent of the increase in the homeownership rate from the 1970s to the late 1990s, according to a study by the Chicago Fed. This transition is leading many to overreact to the sluggishness of homeownership rates.

The importance of educational attainment in evaluating the likelihood of homeownership has also dramatically changed in the last 25 years. In 1990, the difference in the homeownership rate among those without a high school degree versus those with a bachelor's degree or higher was 15 percent. In 2015, however, that educationally driven gap in homeownership has almost doubled to 28 percent. In today’s economy, higher education is an increasingly necessary requirement for stable, well-paying jobs.

In addition to the changing demographic factors, economic conditions also greatly impact the homeownership rate. The changing mortgage rate environment, living in a buyers’ or sellers’ market, economic expansion or recession, income growth, and job creation all influence homeownership. In fact, the impacts of the Great Recession bear this out. According to a U.S. Census Bureau study, homeownership rates decreased from 2007-2012 in the 50 biggest cities in the country.

Achieving the American Dream for All Americans

The causes for the rise and fall of the homeownership rate are complicated and include shifts in demographics, lifestyle choices and economic factors. Concluding there is a homeownership gap based on one characteristic without first accounting for the different influences of other factors oversimplifies the complex nature of homeownership.

Understanding the characteristics that influence how likely someone is to be a homeowner will help us better measure the real gap in homeownership rates by characteristic and understand how to best support the pursuit of the American Dream. Something to be considered as we head home for the holidays. 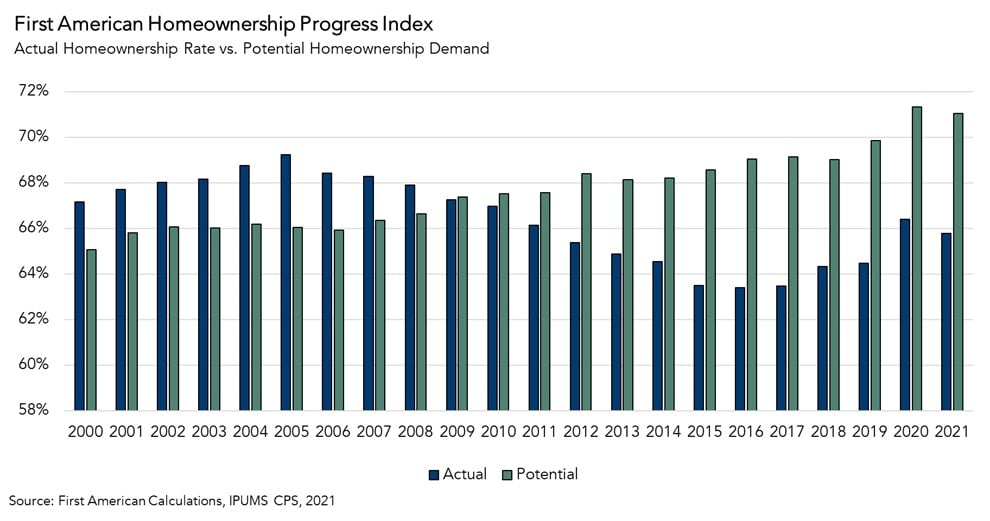