Why Consumer House-Buying Power May Reach a Record in 2019

Later this week, the Federal Open Market Committee (FOMC) will convene and likely announce a rate cut, according to experts. The first Fed rate cut since December 2008 will trigger industry and media speculation about mortgage rates declining further. While changes to the federal funds rate don't directly influence mortgage rates, a rate cut will indicate concern about possible economic weakness and that may increase demand for long-term Treasury bonds, which mortgage rates follow closely.

The consensus among economists is that the 30-year, fixed-rate mortgage will decline from its first quarter 2019 rate of 4.4 percent to an average of 3.9 percent in 2019. Additionally, the expectation of lower rates comes during the longest economic boom in history and a continued healthy labor market, prompting the question: what do low mortgage rates and a still booming economy mean for housing?

Fannie Mae forecasts that the 30-year, fixed-rate mortgage will fall from its July 2019 rate of 3.8 percent to 3.7 percent for the remainder of the year, boosting affordability for home buyers.

If the mortgage rate declines from its current July 2019 level of 3.8 percent to the expected level of 3.7 percent in the third quarter of 2019, assuming a 5 percent down payment, and the July 2019 average household income of $65,800, house-buying power increases a modest 0.1 percent, from $410,000 to $414,000. In this hypothetical 3.7 percent mortgage rate environment, consumer-house buying power would be 13.3 percent higher than it was in July 2018, when the 30-year, fixed mortgage rate was 4.5 percent. In fact, it would be the highest house-buying power in the history of the series, which dates to the year 2000. 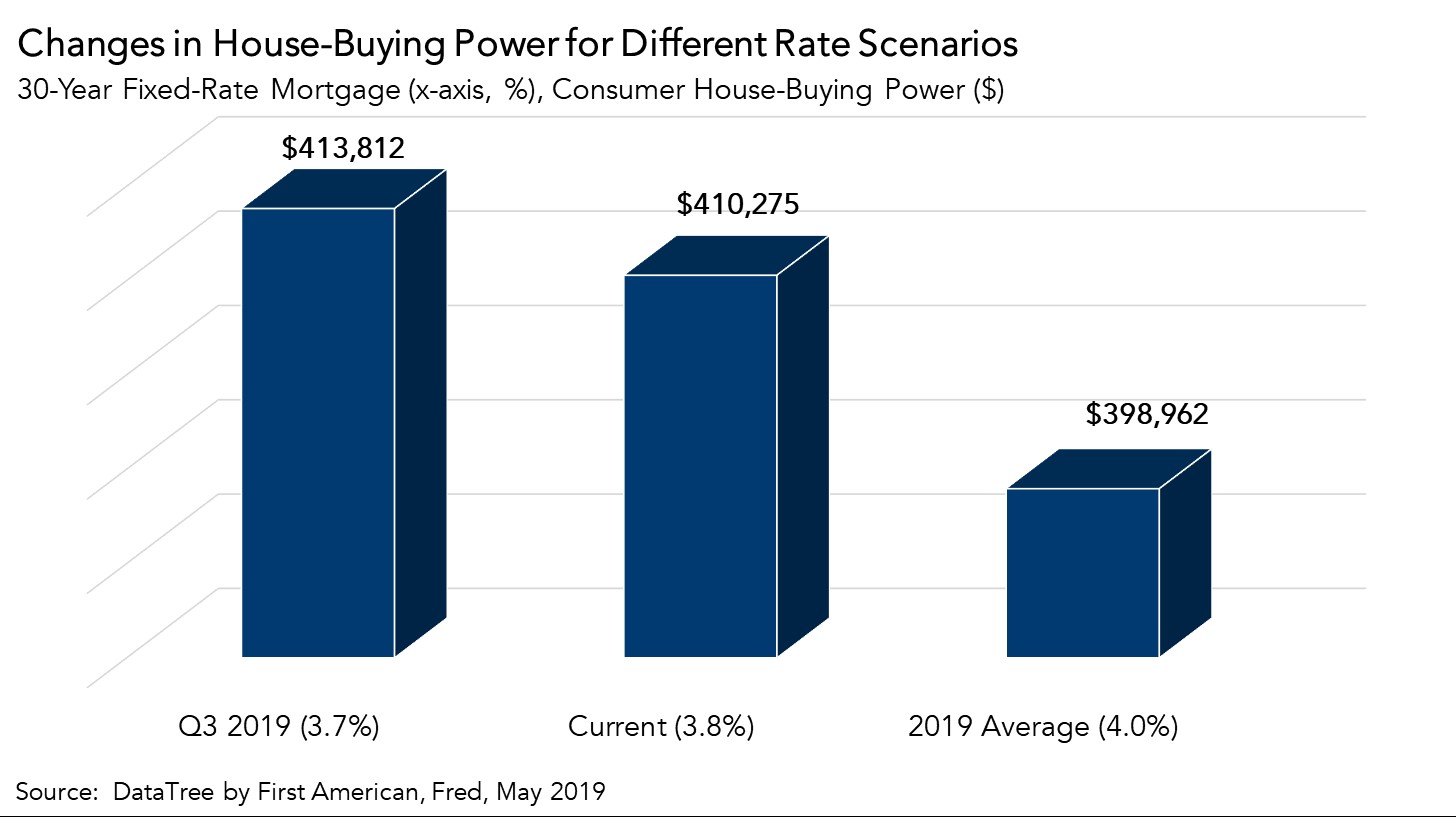 Our estimate of average household income, based on Census and Bureau of Labor Statistics data, is at the highest level since 2000. Average nominal household incomes are nearly 57 percent higher today than in January 2000. Record income levels combined with mortgage rates near historic lows mean consumer house-buying power is more than 150 percent greater today than it was in January 2000. While rates are expected to remain low, the fate of the labor market will determine the direction of the other half of the house-buying power equation and, ultimately, affordability.

The RHPI is updated monthly with new data. Look for the next edition of the RHPI the week of August 26, 2019.

The First American Real House Price Index (RHPI) showed that in May 2019: