How Will a Potential September Rate Hike Impact Existing-Home Sales?

In August, the housing market continued to underperform its potential. Actual existing-home sales are 6.5 percent below the market’s potential, according to our Potential Home Sales model. That means the market has the potential to support more than 400,000 more home sales at a seasonally adjusted annualized rate (SAAR). Severe supply shortages have been the primary culprit for this performance gap – you can’t buy what’s not for sale. The supply shortage, combined with first-time home buyer demand, has created a strong seller’s market, where many potential buyers are bidding on the same few homes, which accelerates price appreciation.

“The thriving economy and growing first-time home buyer demand will have a positive effect on home sales, and recent upticks in construction will bring more supply to the market, providing millennial home buyers more homes to choose from and, ultimately, driving sales growth.”

In addition to rising nominal prices, increasing mortgage rates have eroded consumer house-buying power, which is down 5 percent in June compared with a year ago. Given the focus on interest rates due to the upcoming likely change to the Federal Funds rate, we analyzed what may happen to home sales as mortgage rates rise.

Given that more than 60 percent of home sales are financed with mortgages, it is interesting to examine if increasing mortgage rates, which reduce consumer house-buying power, will reduce home sales.

Consensus among economists is that the 30-year, fixed mortgage rate will increase from its current rate of 4.54 percent to an average of 5 percent in 2019. Despite expectations that higher rates will lead to a decline in home sales, our Potential Home Sales Model forecasts that the market potential for home sales, while currently at a level of 6.1 million SAAR, will reach an estimated 6.29 million SAAR in 2019, even if rates reach 5 percent. The reason? The strength of the economy and demographically driven demand. 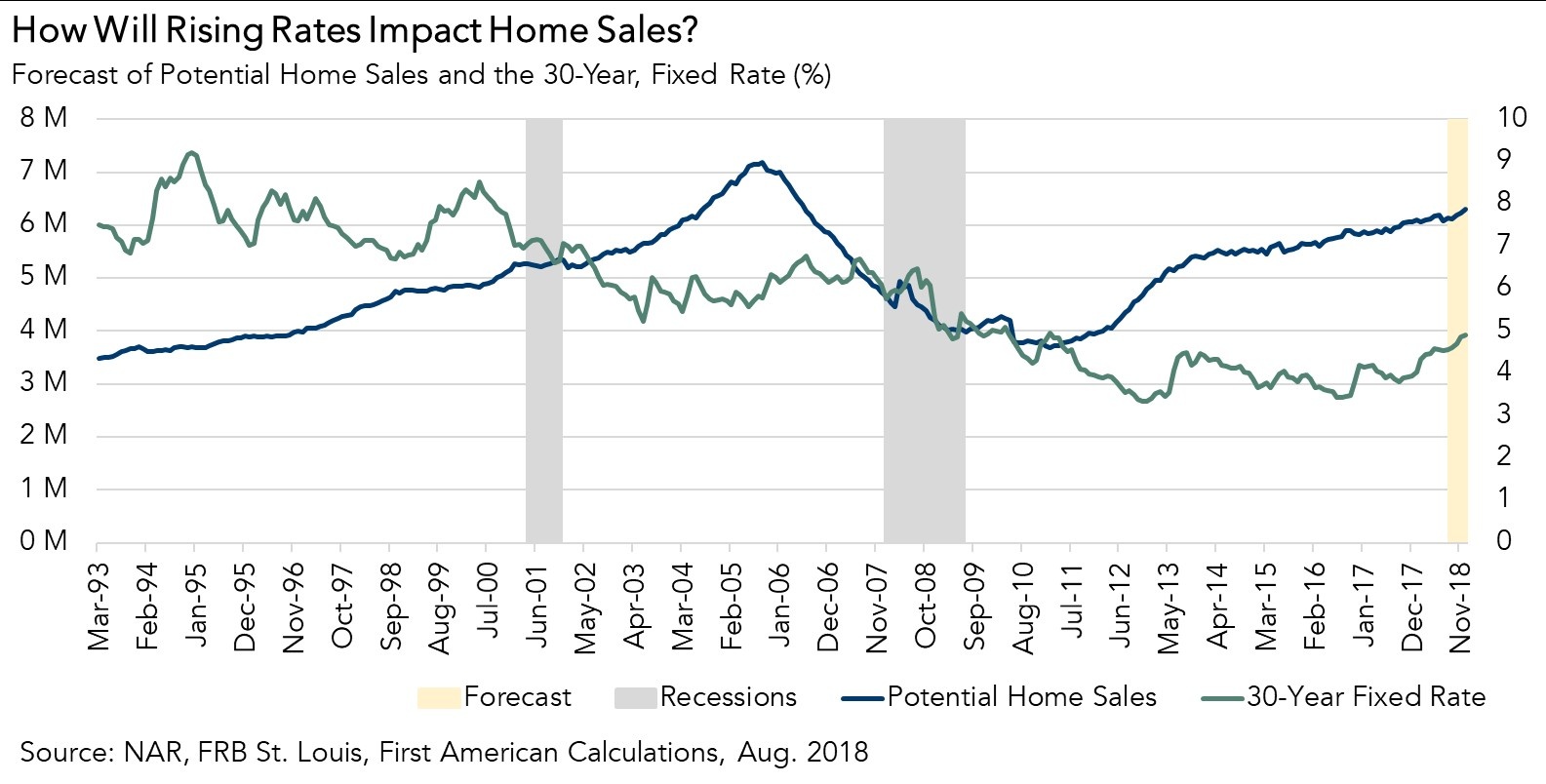 As we mentioned in a previous post, the gross domestic product (GDP) grew at a 4.2 (revised) percent annualized rate in the second quarter of 2018, the strongest pace of growth since 2014. The economy has added jobs every month for 94 consecutive months, producing the lowest unemployment rate since 2000. Additionally, the housing market is facing a wave of millennial first-time home buyer demand. In fact, more than 50 percent of all homes purchased in the second quarter of 2018 were bought by first-time home buyers. According to our Potential Home Sales Model, the boost from the strong economy and first-time home buyer demand should overcome any downward pressure from rising rates on home sales.

While the pace of sales may initially slow, home buyers typically adjust to the new rate environment. For example, when rates increased from 4.5 percent in July 2010 to 5 percent in February 2011, the market potential for home sales fell modestly, from 3.78 to 3.68 million SAAR. The economy was not nearly as strong. The GDP in the first quarter of 2011 declined by 1.0 percent on an annualized basis, compared with 4.2 percent real GDP growth in the second quarter of 2018, and demand was not as strong as it is today.

Our forecast shows that potential home sales will overcome the hurdle of rising rates. The thriving economy and growing first-time home buyer demand will have a positive effect on home sales, and recent upticks in construction will bring more supply to the market, providing millennials more homes to choose from and, ultimately, driving sales growth.

For the month of August, First American updated its proprietary Potential Home Sales model to show that: